We are going to divide the structure into two parts: a first section in which we are going to review the best games that exist on Google Play. That implies an official download and without the need to resort to an external APK. However, it is something that we are going to have to do in this genre of video games since much of the variety is outside the domains of Google.

Mafia III is not going to be on this list

Unfortunately, the absence of what we consider to be the leader of this theme, which is the Mafia saga, is going to highlight. the folks at 2K released a mobile version called Mafia III: Rivals, but it is no longer in development. Not only that, but it is impossible today to download it from an external source since the latest version is outdated.

It was an RPG game that was based on turn-based crime gang fights. Although the gameplay was online, his idea was so antagonistic to the open world of the saga that it caused the closure of its development, disabling all its functions. Developers triggered a connection error message when trying to load the game, hence it is impossible.

Be a mobster officially, without APK

We have a peculiarity in this genre that there are many absences from the games that we include in Google Play. Many of these developments were released but, after a while in operation, they are no longer available in the store. However, in this first section, we add those that are available to download officially.

Don Corleone has summoned you to be part of his clan of organized crime in 1945, to help him achieve his goals. Even if you are part of the Corleone clan, you too can recruit your own bosses, to take care of all the problems that may arise in the dreaded criminal family.

They will be in charge of spying on rival families, and if necessary they will be able to use force to maintain your interests. You can also help allied gangs so that in return they owe you favors that they can then return to you. 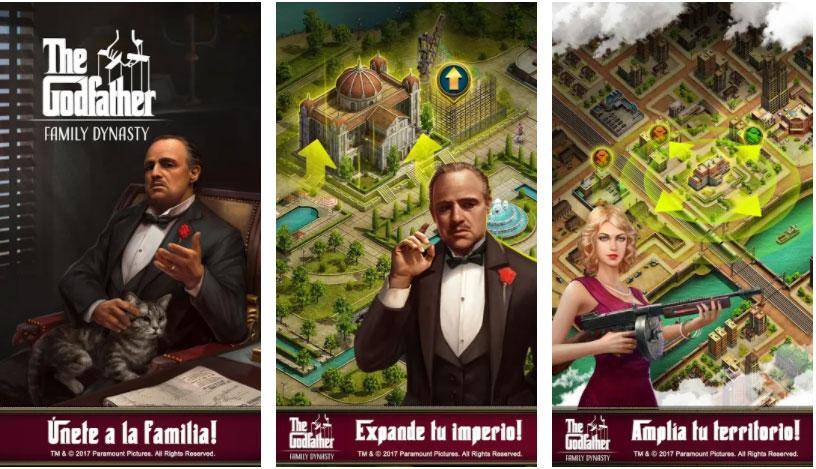 Kabam he also made his own foray into this terrain leaving us this interesting Underworld empire. It must be said that its approach is a little different, since this title is totally oriented to multiplayer mode and, in fact, it should be considered as a MMORPG with enough in common in terms of game mechanics, but in terms of setting, with the medieval fantasy classics of the genre.

The most spectacular thing in the game is probably the pitched battles that we can participate in, with battles between gangs of no less than 80 members.

It could not be missing from this list. It’s a full-blown genre leap, going straight to the games of online strategy and in the purest Clash of Clans style, although with a much more current story in the background, since Narcos It is inspired by the recreation of the life of the drug dealer Pablo Escobar who makes the popular series from which it takes its name. The game mechanics are not much out of the ordinary in these types of games.

Get involved in the dangerous and exciting role of a cartel boss in the official game based on the hit soap opera NARCOS. Decide between dominating through brute force or earning respect through loyalty. Sometimes bad people do good things … Only you can decide.

This is even more like Clash of Clans than anything else. We will have to develop a criminal empire in the city while defending ourselves against our enemies and recruiting thugs or having a very tacky big house in the Russian mobster or Tony Montana way.

The battle for the city has begun. Become the greatest mob boss of all time in this action-packed multiplayer real-time strategy game. A game in which you are the boss who is in charge of feeding and growing his mafia, as well as planning and deciding what missions you give to your mafia members.

From San Cristobalas to Belo Polizonte, gangster fury among the most ruthless gangs has exploded. Criminals from all countries have flocked to the coast, forming cartels, defying authority and transforming each city into a paradise for their own gangsters.

Our goal will be to create our own group. From collecting money to protect yourself to sending your gang to attack a rival gang, play your game well, forge the best alliances, use your Minion’s skills to form a team of baddies ready to die for you and many other tasks.

Titles outside the Play Store to be a gangster

In many of them, the reasons why they were no longer available on Google Play are unknown. Some did not get the expected results, while others did not even reach the West

Yakuza Online is an action adventure for PC and mobile devices based on the popular Sega series, the first of a new era of titles in which veteran Kazuma Kiryu loses the limelight. In this case we control Ichiban Kasuga, an ex-convict who returns to Kamurocho, Tokyo, with the sole purpose of taking the neighborhood from the police.

Heisenberg is back. Breaking Bad Criminal Elements is a strategy and base building video game in which you can make a name for yourself in the meth market and take out your rivals. Interact with characters like Walter White, Jesse Pinkman or Gus Fring to make your place among the main drug cartels in the United States.

In addition to bringing back all the characters from Breaking Bad, the game transports practically all the processes that were seen in the series to the mobile. From the creation of the base of operations and the laboratory to the protection and expansion of the territory and the recruitment of specialists.

It is a game that is a bit out of the ordinary, but surely those who will get hooked on Pokémon GO will like to try, since this Parallel Mafia is another game of augmented reality which, like Underworld Empire, carries the genre of the MMORPG to the internal struggles of organized crime, although it goes a step further and recreates them in the streets of our own city. The fact that he is going to make us get off the couch can be as much a point in his favor as against him, but if we come first, he certainly deserves a chance.

Become the leader of the gangsters in The Grand Mafia, an interesting strategy and revenge game in which we will take control of the underworld. After the death of the godfather, the Family needs a strong leader who will prevail over all the mafia gangs. Of course, that will be our role in this fantastic mobile strategy game.

It’s a strategy game and resource management with certain risque content in which, after seeing the opening sequences, we will put ourselves at the service of a mafia boss. But that will be only the first step, because our mission will be to become owners and lords of the city’s underworld.

How To Fix “Optimizing application 1 of 1” on Android

How To Solve Can’t send RCS messages on your Android

How to join a FaceTime call from Android or Windows