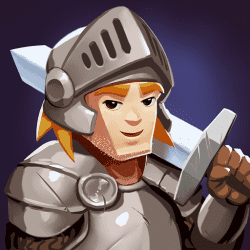 The king’s scepter of the Seven Kingdoms was perfidiously stolen from the throne room. The kings have summoned the mightiest heroes of magic and offered a generous bounty to the person, who returns it. In high spirits, you set off on a dangerous quest in the search of the royal relic. Use tactics to lead legions of heroes, fight the bosses and conquer other players!

As you play, your army will be joined by various kinds of allies – archers, monks, demons, beasts, knights, and many others. Your journey begins in an ancient forest; you will pass through the southern lands and over the high mountains, you will encounter orcs, ghosts, and mysterious nomads.

In the north, you will fight with might and main in the age of Vikings wars, rush into the clash of thieves and assassins, and try to bear the palm in fights of fiends and pirates.