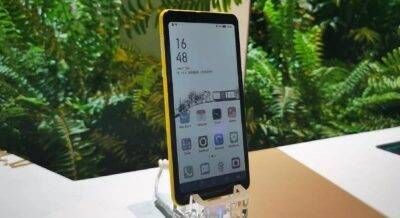 Hisense is known primarily as a TV maker, but it brought something unusual to CES. Her new smartphone is equipped with an electronic ink screen.

Hisense already had a similar smartphone – last year’s A5 model. But it has a black-and-white e-ink screen installed, and a new color screen is used.

Hisense Color looks like an ordinary smartphone, although if you look closely, you can see that it has a grainy screen with not very natural colors. These are artifacts of using e-ink. On the other hand, this technology can significantly increase battery life compared to smartphones in which OLED or LCD matrices are installed.
E-ink has many other drawbacks – for example, a high level of delay, “memory” (because of which the picture on the screen will not be updated until another appears), low brightness and low contrast.
Typically, manufacturers use e-ink in such devices where all these shortcomings are uncritical or turn into advantages (for example, in e-books).

Hisense claims that Color is the first smartphone with a color e-ink screen, and before that device with black-and-white screens made using this technology were released (including several YotaPhone models partially Russian-made).

All the news from Google Assistant at CES 2020

Google Assistant is now able to read sites aloud. If we are browsing an article or reading news, just give the voice command “Ok Google, read it” or “Ok Google, read this page” so as to listen to the text through a natural reading of the assistant, who will be able to translate the contained in 42 different languages.

One of the functions most requested by users who use smart home automation devices is coming in the coming months. This allows you to program specific actions for home management devices.

It will be possible to issue voice commands such as “Ok Google, turn on the coffee maker at 6 am” or “Ok Google, turn off the TV in half an hour”. Setting up a smart device with Google Assistant will now be easier thanks to the new notifications and suggestions that will appear on the smartphone after installing the manufacturer’s app.

Google Home will quickly invite us to pair the new device with the assistant, without entering additional credentials.

Google took privacy and transparency regarding user data used in its products very seriously last year. Several innovations will be added to the tools already available that allow you to delete our activities registered in the account.

By default, the assistant will no longer save audio recordings unless the user authorizes it to improve speech recognition. It will also be possible to ask “Ok Google, are you saving my audio data?” , To find out whether or not the recordings are kept on the company’s servers.