Why charging your phone overnight is harmful

Many have a habit of leaving before falling asleep recharge their phone overnight. It is thought, in fact, that charging it during the night is useful, but in reality, few people know that it is a practice that damages the battery of the device and reduces service life in the long run. In this article, we want to explain to you why you shouldn’t charge your smartphone overnight and we also provide you with some information on how to best maintain the battery. 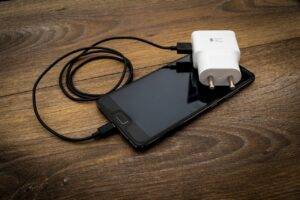 How do you determine the life expectancy of a battery?

Rechargeable batteries leak slowly capacity over time (even if they are not used) and already after one year of use, it is possible to notice a decrease in their performance. For many users, after two years of continuous use, going through a whole day without having to recharge the mobile phone is something unthinkable. Many, thus, decide to change the battery of your smartphone with the hope that the new one will last longer and give a new life to the device.

Manufacturers usually specify the life expectancy of smartphones by saying “battery charging cycles“. Batteries have a limited number of charge cycles before a significant reduction in their life takes place. A battery will go through a full charge cycle when it discharges completely and is then recharged to 100%. When a battery has exhausted its charging cycles it can still be used but I will have to deal with the decreased performance.

Lithium-ion batteries (Li-Ion) are used in most rechargeable technologies, such as smartphones, laptops, tablets but also other items. The most popular lithium-ion battery is the 18650 which usually requires between 300 and 500 cycles of full charge before undergoing a reduction of about 75% of its capacity.

Smartphones and tablets use a variant of the lithium-ion battery called lithium-ion-polymer (abbreviated Li-Poly or, more commonly, LiPo). This version is safer, smaller, recharges faster, and lasts even longer. You need to know that the battery degrades faster when you charge it up to 100% and let it drop below 20%: your device works best if it is never charged over 80% and discharged over 20%.

Reload having your phone at the right time is one of the secrets to increasing battery life. If you keep your battery between 20% and 80% charge you can get it 1000 complete cycles or more before it undergoes a noticeable decline in capabilities.

This is due to how the battery actually works. The lithium batteries, in fact, consist of a layer of cobalt lithium oxide and a layer of graphite: the lithium ions move from graphite to lithium oxide thus releasing the energy that keeps the device running. During the charging sessions, however, the ions are brought back into the graphite layer.

How to take care of the smartphone battery

Why is it better not to charge the phone overnight?

As mentioned, leaving the device charging overnight is not a good idea. The advice we give to remedy this practice is to disconnect the phone when you go to bed and recharge it in the morning after waking up. Each of us, however, can find gods in their evening or morning routine suitable moments in which to recharge the phone. Please note that it may take just an hour to charge your device up to 80%.

It should be clarified that this practice is not recommended for the danger of overload, as manufacturers put safeguards in place to prevent this from happening, but why charging the device up to 100% and keeping it connected you are making excessive use of the battery forcing it to consume energy when it is not needed. A prolonged charge can also lead to a temperature increase which in addition to degrading the battery can also be dangerous, especially if you keep the phone under your pillow as the lack of airflow creates potential damage to the battery.

You need to avoid exposing your phone to any extreme temperature: Temperatures below 0 degrees and above 35 degrees degrade the battery faster. For this, for example, you should not put the phone in the sun in the summer or leave it in the car during extremely hot or cold days. In particular, when it is charged in a too hot environment, the device can be seriously damaged and the battery could be irreversibly damaged. 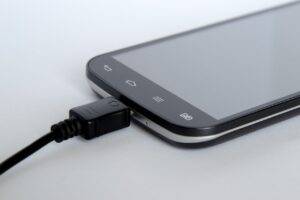 Is it possible to use the apps while the phone is charging?

You shouldn’t use your smartphone for high-intensity activities while it is charging as this can cause damage to the device. Take your laptop for example when you have too many apps running at the same time: what usually happens is a computer heating up, causing slow performance due to CPU thermal throttling.

The same can happen with the smartphone. For many, it may be tempting to watch YouTube videos or reach the next level of their favorite game while connected to charging, but this sadly negatively affects the battery. Therefore, if you want to preserve your device, we recommend that you do not use certain apps while it is charging.

There is a foolproof way to get your device only charging up to 80%: keep an eye on it. If this solution isn’t ideal for you, remember that you can download some software for a smartphone, pc, or tablet that can help you. For Android smartphones, there is Accubattery, an app that shows tips to improve the battery status and allows you to set an alarm when the device reaches the desired recharge percentage. Those with iOS, on the other hand, can download FruitJuice, an app that helps extend the battery life of your Mac.

Some laptops also have settings or apps that allow you to configure the maximum battery charge percentage. For example, Lenovo makes everything easier with the software Lenovo Energy Management which allows the battery to recharge only up to 80%, thus optimizing its duration.

How to reduce battery consumption on your device

In addition to checking the temperature and charge percentage of your device, you can extend the battery life even further reducing the frequency of recharging. Fewer recharges mean fewer cycles and therefore a longer life for your device’s battery. Most smartphones and some laptops also have an “Energy saving” which allows you to extend the battery life when the device is about to run out. Furthermore, iOS devices also have a function called “Usage time” which not only provides information on the most used apps but also allows you to enter a time limit for their use.

Also, know that you can optimize the autonomy of the device with these two tricks: by adjusting the brightness of the screen and using Wi-Fi. Contrary to what many believe the Bluetooth and Wi-Fi connections they do not consume much battery, while GPS and mobile data network can significantly reduce its life. 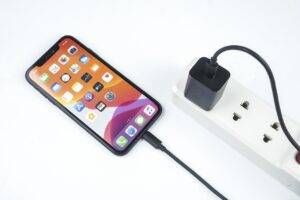 How to best preserve technological devices

If you don’t intend to use your device for a long time you still have to take care of the battery. In particular, the condition of the battery will be affected by two factors: the ambient temperature and the percentage of battery charge when you use it for the last time. Before putting it away, turn off the device to prevent the battery from continuing to be used and try to store it in a cool and dry place.

The best solution would be to store the devices in an ideal temperature range between 16 and 22 ° C, however, normally batteries are better able to withstand cold environments rather than hot ones. Also, remember not to fully charge or discharge your device’s battery, and before storing it away charge it up to about 50%. If a device remains inactive for a long time after charging it to 100%, the battery capacity could deteriorate, while if you store it with a completely discharged battery it could be damaged to the point of making it difficult, if not impossible, to recharge it again. If you leave it turned off for more than six months, remember to recharge it up to 50% a couple of times a year.

Therefore, how is that possible extend the life of your battery smartphone? Here, in conclusion, are some simple tips that will allow you to enjoy your device for longer.

In the short term, you may not notice any differences or see any benefit from using these tricks. I assure you, however, that you will be very happy when your phone still survives a full day on a single charge after more than a year of purchase.