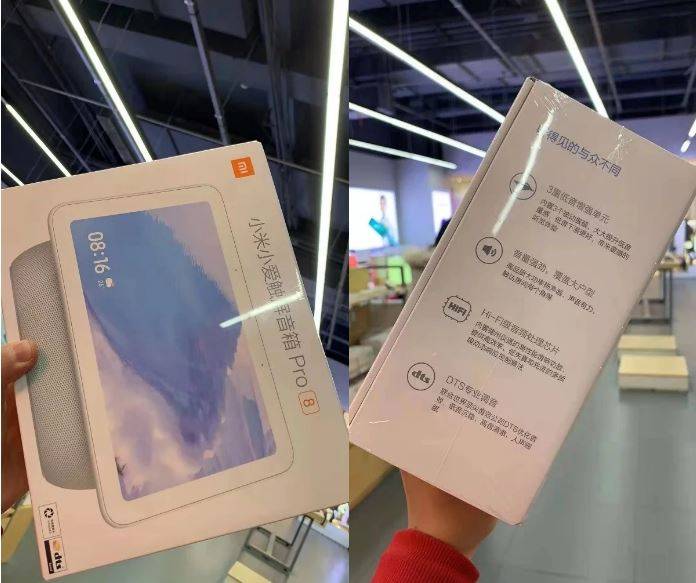 After Redmi launched its first smart speaker on December 10 last, Xiaomi is preparing to remove the veil on the new Xiaomi Smart Display Speaker Pro 8. Pending the official presentation, however, the smart display has been shown in a couple of leaked images.

As you can see, the Xiaomi Smart Display Speaker Pro 8 is very reminiscent of the Google Nest Hub in its design, with the display that seems to float above the speaker covered in fabric.

The images show that the Xiaomi Smart Display Speaker Pro 8 will arrive in white color. It will have a long speaker at the bottom and a larger touch-screen display above. It appears to have three passive built-in diaphragms that could offer quite a good sound.

The sales package also mentions that thanks to the high-power speakers, a powerful sound is emitted that can reach every corner of the room. Also talk about Hi-Fi audio processing chip combined to Texas Instruments’ built-in high-performance audio amplifier, which offers high efficiency, low distortion, and advanced dynamic multi-band response control algorithm. It also has professional DTS tuning and other functions.

In Xiaomi’s intentions surely this new smart display has the task of strengthening its offer in the AIoT sector, a real main market in which the company will concentrate from the near future.

While the company hasn’t revealed anything about this upcoming product, the device is said to be priced at 599 yuan which, in exchange, converts roughly into 79 euros. Since the device has already passed the 3C certification process, we expect it to be launched soon enough even if, as always for this kind of Xiaomi devices, only for the Chinese market.

What do you think about it? Is the similarity with the Google Nest Hub too obvious or have the Xiaomi engineers managed to distinguish them enough?

Smartphone Specifications. What means and how to check?

How to add a Google account to Huawei P40 Pro after installing GMS?