What is the HEIF (HEIC) format and the differences with JPEG

The format for JPEG images (also called JPG) is now known to everyone, and universally widespread. Many images on the web are in JPG, the photos we take with our phone are even more frequently saved in JPEG files. The luck of the format is due to the ability to compress images avoiding big quality losses.

Today, however, we are not talking about JPEG but about HEIF, a newer one format for pictures, which has the ambition to replace the JPG format.

HEIF is an acronym and stands for High IS efficiency THEmage Format (in Italian it means: high-efficiency image format).

According to MPEG (Moving Picture Experts Group) and Apple, the new file format should allow you to have image files of the same quality that take up half the space.

What are HEIF and HEIC

HEIF is a container format, a bit like the MVK format for videos; it can contain files encoded in various ways, even in JPG format.

The HEIF format becomes HEIC when the files inside it are encoded with the HEVC compression standard, which allows better efficiency on image compression. 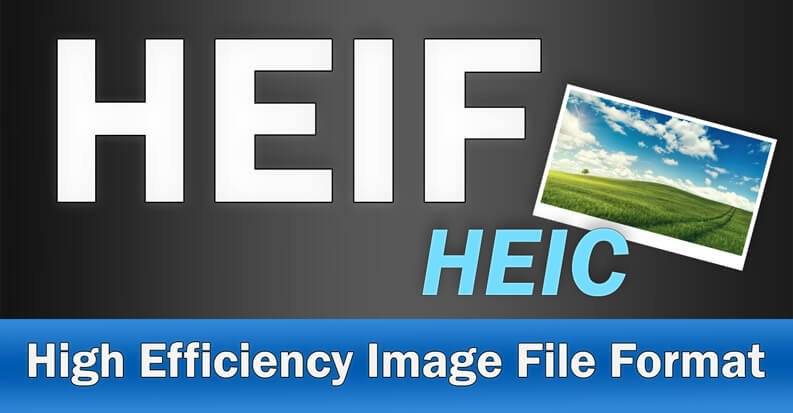 The versatility of having a container format available allows you to do impossible things previously. The new format was almost a forced choice for Apple looking for a way to save the Live Photo and information from the Portrait mode.

The “Live Photos”, for those unfamiliar with them, are animated photos, which contain a short video taken before shooting. Portrait mode creates files that contain the original shot and the processed shot for blurring the background.

The advantages of HEIF

There greater efficiency of the new format is due to the new HEVC compression algorithms, also used in the popular H.265 video format. These algorithms allow obtaining HEIC files of indistinguishable quality from a JPG, halving the storage space occupied.

Other important advantages derive from support for transparencies and colors up to 16 bits Apple has chosen the new format as the default on the new iPhones also because they take images with an extended 10-bit color range, which would be lost if they were encoded in JPG instead of HEVC. JPEG only supports 8-bit color depth.

Moreover, HEIF allows you to rotate images, to crop them, to insert titles and overlays without having to recode the original file. So the changes are reversible and non-destructive, they are also instantaneous.

The container nature of the HEIF file is very suitable for computational photography. Computational photography is that branch of AI that is concerned with recognizing objects in photos and classifying them. Within a single file, thousands of photos and the metadata necessary for categorization can be inserted, so that they can be quickly fed to Machine Learning for its training.

The limit of the new formats

The HEIF format is freely usable (even if it is not a free format), therefore there are no particular problems for its diffusion, implementation, and use. The real problem is HEVC encoding, which is proprietary and supplied under license by the MPEG consortium.

Compatibility has expanded and as we have said now both formats are supported by all major systems. Support for the new format has been added on Windows 10, on Apple devices with Mac OS from Sierra onwards, on iOS since version 11 and Android since version 9 (Pie).

But iOS, through automatic conversion, continues to convert HEIC files to JPEG format when sending, because many apps still do not support the new format and, as already mentioned, JPEG is currently the most compatible format with the various devices.

To date, no browser supports the new format with the extension heic and heif. HEIC is far from imposing itself as the image format of the future because big giants like Google push on other advanced high-efficiency free formats like WebP.

A good number of programs for photo editing and drawing natively support the new format, among these:

How to speed up your notebook by changing the hard drive