In this guide, we will show you the detailed steps to update Magisk to version 25 and its subsequent builds. Custom development is literally filled with a plethora of mods and apps scattered across various domains.

However, the app that provides root access for applications has always been a favorite of tech enthusiasts. In this regard, the Magisk app is the one that reigns supreme for the past two years. Running without a system without any changes to the system partition, it sees some nifty features up its sleeve.

Aside from the aforementioned and arguably the most important feature of providing root access, it has completely streamlined the flashing process of magisk modules. likewise, it has some built-in provisions for hiding root from various apps by masking its identity and the MagiskBoot feature that allows you to unzip and repack boot images and then root your device.

Then with version 24 onwards, there is also the introduction of Zygisk, which allows developers to execute code in every Android application process.

Finally, Magisk developer topjohnwu launches the update for this app at regular intervals. In addition to introducing some new features, it eliminates the underlying bugs and improves overall performance. And this was also the case with version 25.

This time around, there were a number of noteworthy additions and bug fixes [refer to the changelog at the end to get hold of all the changes]. So without further ado, let’s get started with the steps to update the Magisk app to version 25+.

How to update Magisk to version 25.1

As this section lists Magisk update instructions, let’s assume your device is rooted and has already installed an older version of Magisk. However, if your device is not currently rooted, you should check the FAQ section below instead.

To begin, launch the Magisk app on your device.

You should now see the Update button next to Apps, tap on it.

Next, tap Install in the change log that appears. 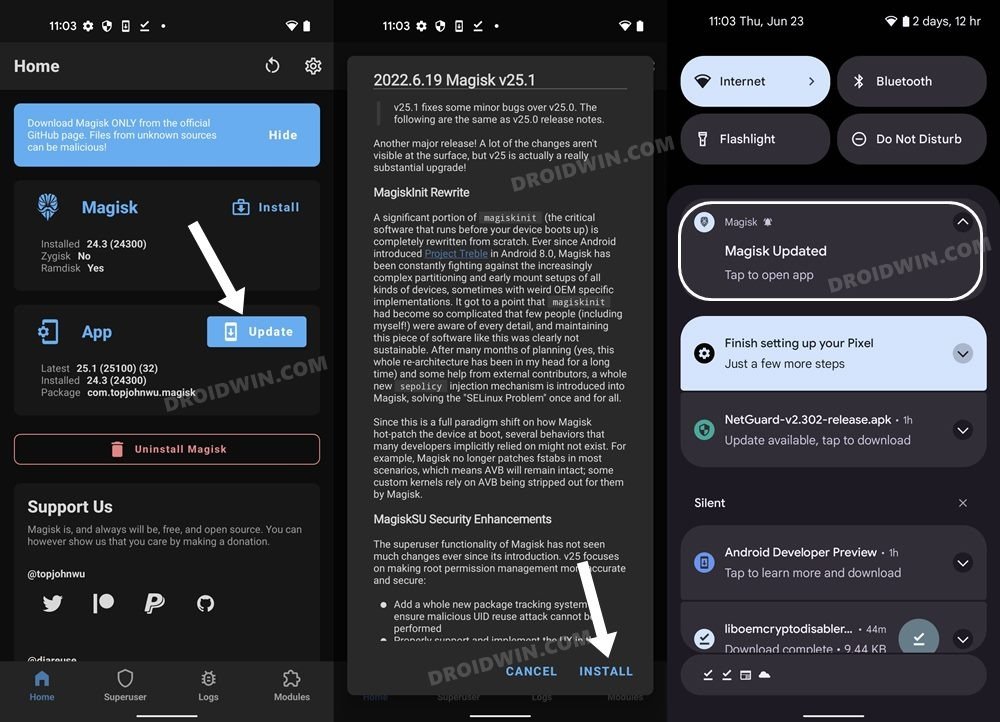 The app will now be updated and you will be notified of the same.

Launch the app again and this time there will be an update next to Magisk, tap on it. 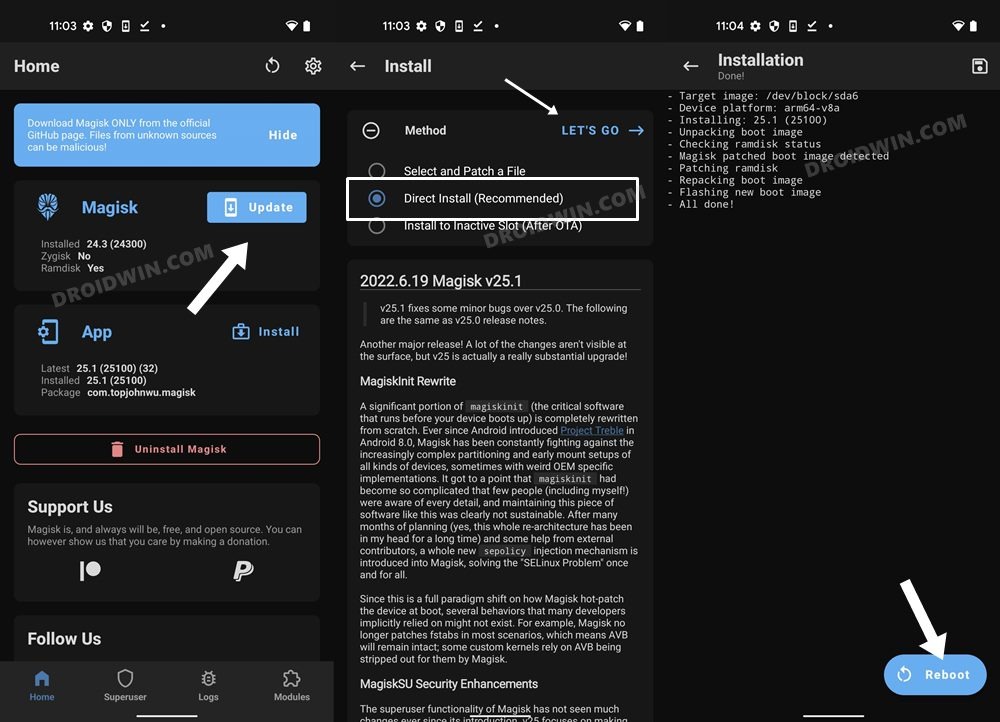 The latest version of Magisk will now be installed on your device. Once done, hit Restart.

That’s all. These were the steps to update Magisk to version 25.1. If you have any questions about the steps mentioned above, please let us know in the comments. We will get back to you as soon as possible with a solution.

Faq: how to install Magisk version 25+

If you haven’t rooted your device yet, please install the latest Magisk v25 APK first as you normally do for any other app. Next, extract the stock boot. img from your stock firmware, apply the patch via Magisk, then flash via Fastboot Commands. In this regard, you can refer to our detailed step-by-step guide [with screenshots]:

From this section, you can have the complete changelog of all Magisk version 25 and later releases [Source: GitHub ]