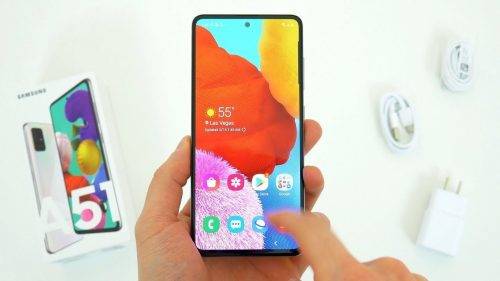 The Samsung launched the Galaxy A51 several months ago and began to distribute security updates, together with some software improvements, in May, the user interface has been updated to the OneUI 2.1, but some features of the camera were not included and now the manufacturer Korean corrected the problem.

The update is version A515FXXU3BTF4 / A515FOLM3BTE8 / A515FXXU3BTE7 and is 336.45 MB in size. In addition to stability improvements and bug fixes, there are now single capture capabilities, My Filters, and nighttime Hyperlapse in the camera application.

The Single Take feature records a short video of an interesting moment and then the AI ​​suggests a variety of different photos, gifs, and short videos that can be easily shared on social networks.

My Filters feature allows the user to create their own style of photos with different styles and colors for future photos. Night Hyperlapse is exactly what the name suggests – and allows you to create hyperlapse videos with Night Mode settings.

The update has already arrived in Malaysia but is expected to reach phones in other markets in the near future. It also includes the June 1, 2020 security patch, which comes with “new performance improvements”.

The changelog also mentions that some general stability functions have been improved along with the security of the device. This update is not yet available in all countries. However, we can safely assume that it will reach all equipment in the next few days.

This update weighs 335 MB. That is, it is not that big. However, make sure you have enough storage before trying to download and install it.

How To Activate Hidden Themes Of Android 10 Sony Xperia

Google Maps will display Uber prices directly in the app