Best Mortal Kombat games to install on your Android mobile

Not that there are many exponents on the Android platform. In fact, there is only one official game exceptionally developed for mobile phones, although luckily we have PS2 emulators with which we can review various titles of the saga at that time.

This is a reduced and mobile-optimized version of the classic Mortal Kombat for game consoles. A game that is updated with each installment, in such a way that now we can also play with the Mortal Kombat 11 characters, with a total roster of more than 130 characters.

The graphics are the best we’ll see on Android, and of course, there is a lot of blood and brutality, so it is not one of those games that you would want to install on your little nephew’s mobile. The combats are 3 against 3, with touch controls that are handled quite satisfactorily. A game that you should definitely try if you are a fan of the saga or fighting games in general.

A somewhat special game, since Mortal Kombat Deadly Alliance, is one of the best MKs in history, both graphically and in gameplay and game modes. With excellent motion capture, immense and interactive sets, a true saga ‘gore’ and wild style, and a lot of extras and new characters, we find more than we expected to find from Ed Boon and Midway.

Although it has drawbacks – such as the small number of combos of each character – MK stands out as a firm opponent of Tekken4 or VF4 Evolution, both technically and playable. Innovations such as the appearance of bladed weapons or the possibility of changing the fighting style in the middle of the battle -between three existing for each fighter- are details that make us see that they worked hard.

The game is characterized by fast melee and combat with special weapons, secret characters, and others that reappear, movements and combinations with new victims, and deadly battles. Mortal Kombat Deception offers, for the first time in its time, an advanced competition model with free rankings, an action/strategy board game, and a unique puzzle that complement the improved one-on-one fighting mode.

As there is not much to choose from officially, we will have to resort to other similar titles to expand the offer a little more. We know that the essence of Mortal Kombat is 1 vs 1 combat reflected in 2D graphics. We had to narrow down those requirements to show you the following games.

Shadow Fight 3 is a quality leap compared to the previous installment of the saga, something remarkable considering that Shadow fight 2 I had already set the bar high. If in the second installment we controlled a shadow or silhouette in 2D, in this new version we have scenes and characters rendered in 3D, with a high level of detail and very elaborate kinematics.

Both the controls and the physics work very smoothly, and although there is no multiplayer mode, the gameplay is attractive enough that you do not need much more to enjoy it.

As its name suggests, Skullgirls is a classic 2D 1vs1 fighting game but with certain RPG elements. Its aesthetics and the character design are based on anime, with frenetic gameplay, being a highly recommended title for those looking for fast and direct action without time to think too much.

Skullgirls also allows us to improve our characters with new skills and movements, which together with a system of daily missions and a very interesting story mode, makes us stay hooked on the game much longer than with the typical fighting arcade.

One of the most popular fighting games that we can currently find on Android. The graphics are pretty decent – although can be improved – and includes a roster of more than 70 UFC starfighters such as Conor McGregor, Cain Velasquez, or Georges St-Pierre, each with their own set of special moves.

The controls are very simple, leaving very little room for creativity as it all comes down to pressing buttons and sliding your finger across the screen. A casual title with which to have a couple of fights without too many complications. Of course, we are facing a free EA game but based on micropayments, with all that this entails.

Knights Fight is a three-dimensional fighting game set in medieval times. The graphics are quite good for what we are used to seeing on mobile phones, with very careful gameplay that is enriched by the large number of weapons that we can carry, from swords, through mallets, axes, and knives of all kinds. All this always under the protection of a good shield. A different fighting title with a lot of charm.

Many people do not know, but Capcom a few years ago came to develop an official version of the legendary Street Fighter IV for Android. The graphics are at the level of what we could expect from a title of this size, supports Bluetooth controllers (a must if you want to get to something), includes arcade mode and multiplayer mode. A very satisfactory playable experience, although it seems that the online mode feels a bit empty.

Although its installation is free in quotes, it should also be clear that in this way they only give us access to 4 players (Ryu, Chun-Li, Guile, and Zangief), being necessary to buy the premium version of about 5 euros to be able to squeeze the game in all its glory.

The best King of Fighters in the opinion of most players. It is perfectly adapted for Android, although for a price of 3.49 euros. If you are a fan of its graphics and 38 different characters, with only four buttons we can control the movements. And if you want to play against another friend, you can synchronize via Bluetooth.

Another alternative for martial arts lovers is Kung Fu Fighting, a classic where we will put ourselves in Lee’s shoes. A reference to the teacher and with many nods to this whole world. It is a simple game and where the powers are well marked in different spheres. 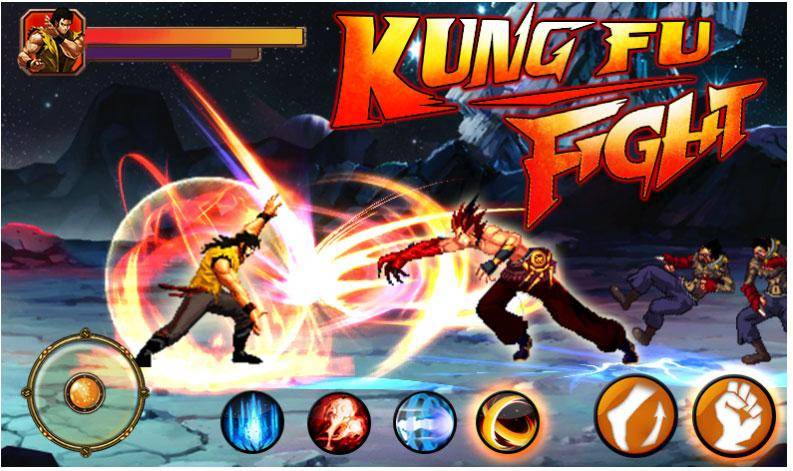 If your favorite martial art is KarateWith Ultimate Fighting we have a different game. Some 2D graphics but with a different dynamic. The blows must be given by pressing the screen at the precise moment, combat designed directly for mobile interfaces.

Few matches are more spectacular than WWE. Here we can put ourselves in the shoes of stars like John Cena or The Rock and fight giving jumps, blows, and movements of the wildest. The game will allow us to choose between six classes: brawler, flying, powerhouse, technical, wild, and showman.