MacOS Ventura: what is Stage Manager and how to use it

During the last WWDC 2022 conference organized in June, the House of Cupertino presented the new macOS Ventura, as well as many other innovations. This latest Mac OS update brings powerful productivity tools and new Continuity features that take Apple device usage to another level. For example, those who use an iPad or Mac, or both, will surely be thrilled by the arrival of Stage Manager, a feature that helps to stay focused and be more productive. Stage Manager is Apple’s solution to improve multitasking and can be enabled or disabled via the Control Center menu on both Mac and iPad.

What is Apple Stage Manager?

Stage Manager is a feature designed to better organize your desktop and create a more orderly and harmonious interface on devices. The idea is that the app you are working with is in the foreground center, while the other apps and windows are easily accessible and arranged on the side. This way you can quickly switch between them and your desk stays tidy. Not only that: the apps on the side update in the background, so you always have incoming messages and emails under control.

It’s a solution that Apple has researched to try to help users stay more focused. Apple also recommends using Stage Manager in conjunction with other features like Mission Control because this allows you to have multiple apps open on Mac and iPad and always have a single overview of what you’re doing. 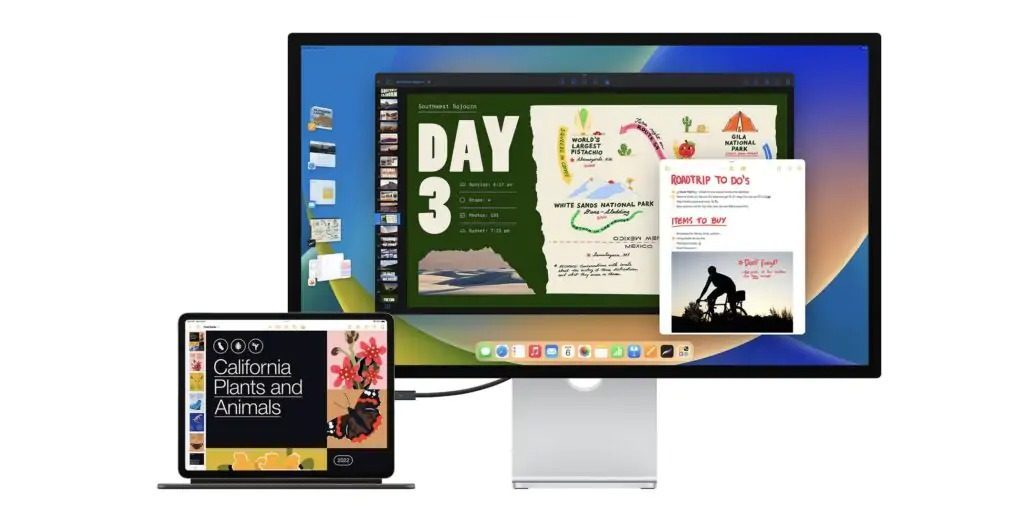 What does the Stage Manager do?

You can use Stage Manager in conjunction with the Mission Control and Spaces functions to arrange windows and apps however you want and work with greater flexibility. Unlike now, with Stage Manager, you can change the interface of your device. With the new update while using an app the other open windows will be placed on the side of the display in the form of small icons.

The window of the app you are working on appears in the center and is large enough to work on it easily, without the need to open it on full screen. The other open apps are arranged on the left side in the order of use: you will see at the top the ones you used last. However, a simple click is enough to switch between windows. This feature makes it easy to log in and out of all applications but at the same time keep an overview of what is open at all times. If a project requires the use of multiple apps, the different windows can also be grouped with the Stage Manager.

Even on the iPad, users can create groups of windows of different sizes, drag windows sideways, or open apps from the Dock for faster and more flexible multitasking. Stage Manager also unlocks full external display support with resolutions up to 6K, allowing users to better organize their work. Thus, it will be possible to work with up to four apps on the iPad and four apps on the external display.

How to activate Stage Manager on Mac

Stage Manager is enabled by default on Macs running macOS Ventura, but you can turn it on and off using a toggle in Control Center. You can also change the apps shown in the Stage Manager, even if you only have two choices: Show recent apps, a setting that will show recently used apps on the left side, and Hide recent apps, a setting that hides those apps until you hover over the left side.

You can also add Stage Manager to the Mac menu bar. To do this: Open System Preferences> Control Center> Stage Manager and select Show in Menu Bar.

How to use Stage Manager on a Mac

After enabling Stage Manager, launch the applications you want to use. If you have turned on the “Show recent apps” option, you will see small icons depicting these apps appear on the left of the display. You can then drag the apps you want to use to the center of the screen, so these apps are now part of the same group and are available side-by-side in the Stage Manager window. 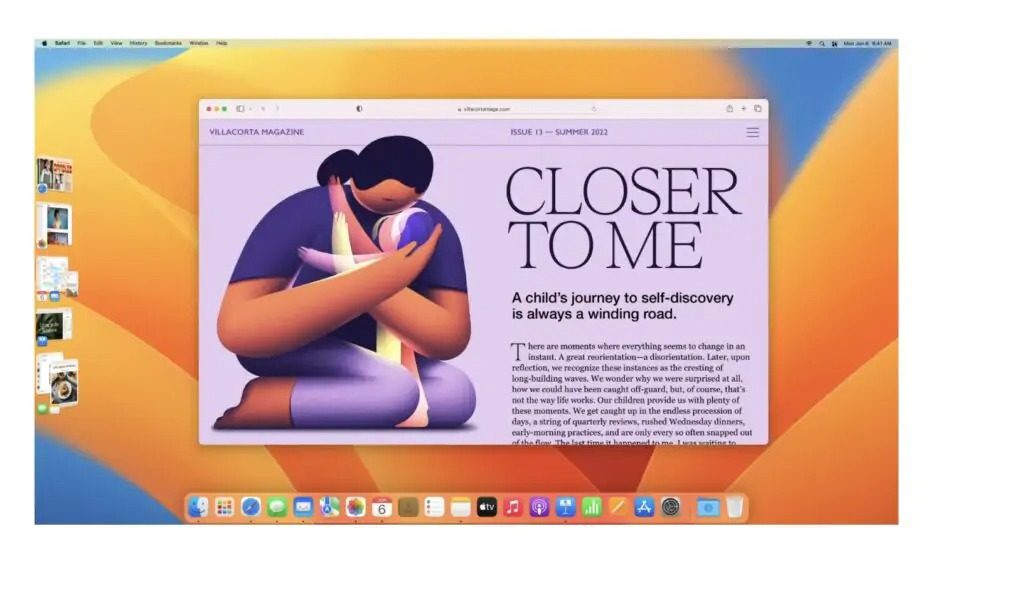 How to enable Stage Manager on an iPad

Even on an iPad, you can use the Control Center to activate the Stage Manager – just swipe down from the top right corner of the screen and tap the Stage Manager icon. Once enabled, the apps you are using will appear in the center of the screen while on the left you will see the applications that are currently active, but not used. You can drag side windows, or open apps from the Dock, to create groups of apps that you can access with one click.

How to use Stage Manager on an iPad

Stage Manager offers a truly new multitasking experience, automatically organizing applications and windows and facilitating the transition from one activity to another. As with the Mac, even on an iPad, you can set the Stage Manager to show or hide recent apps on the left side. This setting can be adjusted by always going to Control Center> Stage Manager.

For the first time on an iPad, the user can create a single screen with multiple windows of different sizes overlapping, while the other open applications remain on the left side of the screen, arranged in order of opening. By simply dragging the apps you can create dedicated spaces for your every interest and you can choose whether to use specific full-screen applications. 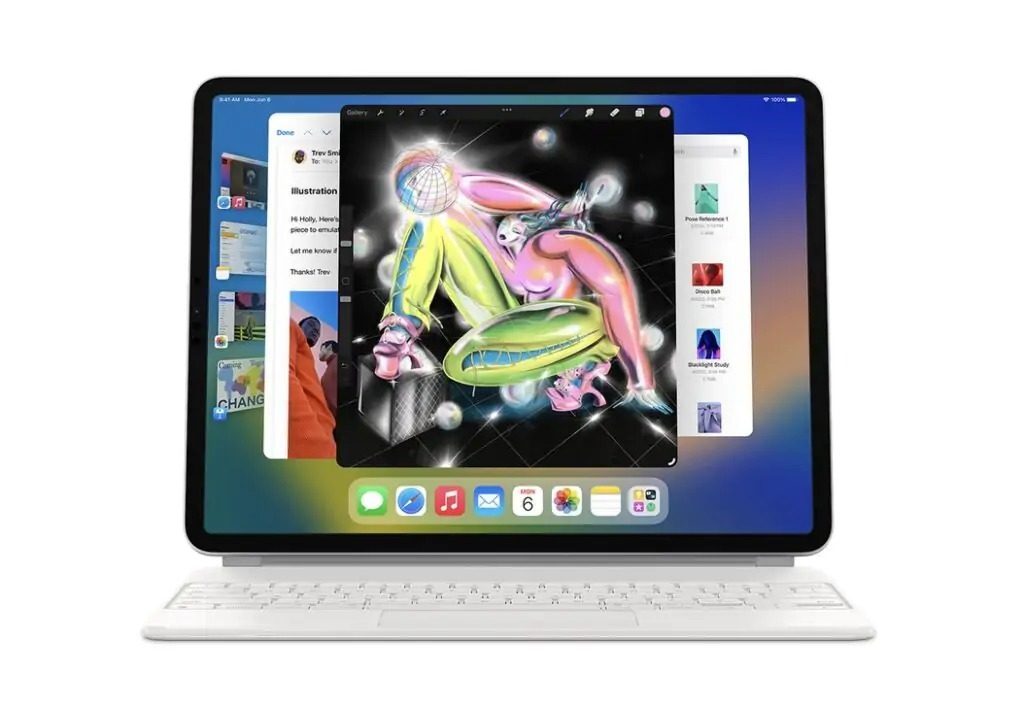 What devices can run Stage Manager?

To run Apple’s Stage Manager user interface, you need to use a Mac or iPad running macOS Ventura or iPad OS 16. The feature is compatible with any Mac capable of running macOS Ventura but is only available for iPads equipped with the Apple M1 processor. Unfortunately, this limits the introduction of this new feature by precluding its use in the iPad Pro (11-inch and 12.9-inch) and the recently introduced iPad Air. If your iPad doesn’t have an M1 chip, the Stage Manager won’t work.

Stage Manager is the new feature that Apple has designed to offer its users a whole new way to stay focused on business. With Stage Manager, however, you not only want to increase the level of concentration but also productivity and multitasking thanks to the ability to easily switch between apps or windows. Stage Manager will be one of the biggest innovations introduced by Apple in recent years on Mac and iPad. MacOS Ventura (and iPad OS 16) has been released in beta for now, while the official version will be out in the fall. This means that while Apple has already introduced these new features to the public, some things may still change. Stage Manager, therefore, is also in its beta version and some changes could be made before its official release.