How To Flash Apro Air A5 Firmware [Stock ROM]

The 2019 FlagShip, Huawei P30, P30 Pro, with Android-based EMUI 9.0 and upgradeable to Android 10 is receiving major EMUI 10 and 10.1 updates. Huawei has started to distribute a new software update for P30 smartphones. This update mainly includes the February 2021 Security patch, which corrects different levels of exploits and problems to improve the security of the system. The update was released for Chinese consumers and will be available for global models shortly.

About the Huawei P30 series EMUI 11 update: In HDC 2020, Huawei released the latest custom operating system, EMUI 11 based on Android 10. Therefore, the P30 series is eligible to install this update.

What to expect from EMUI 11?

Huawei has started to distribute EMUI 11 for its smartphones, which brings new features, new user interface design, and a whole new experience for fans of the brand. Today we have a guide that explains how to update your Huawei smartphone to this latest version of EMUI.

1. Check that the device does not have any pending updates to install, you can do so in Settings> System> Software update. 2. Before starting the update, they must have a strong WiFi connection and we only recommend installing system updates when the battery is at least 50% charged. 3. Verify that you have a minimum of 5 GB of internal storage on the device. 4. Don’t forget to backup your important data to ensure that you lose files during the update process.

How to upgrade to EMUI 11 on your Huawei: 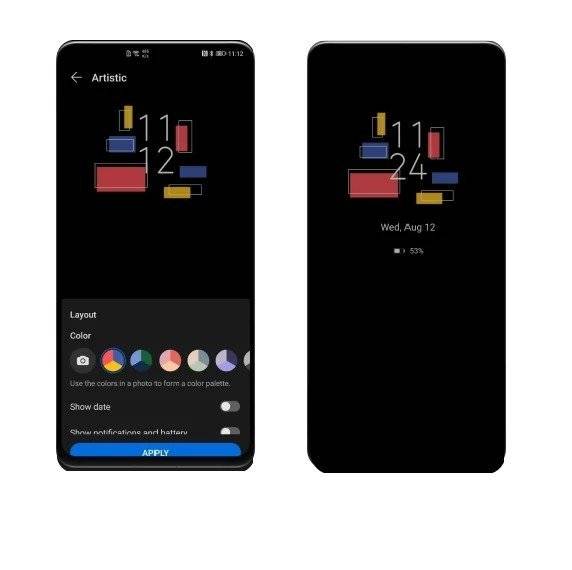 One of the most common requests in Huawei forums and user communities is a more versatile AOD. Having the possibility to have useful information always available is excellent, but users have shown on several occasions that it is important to be able to customize Always On Display to their liking. Huawei listened to the prayers of its users and brings in addition to several animated AOD options, the possibility to customize the AOD with an image of your choice. Simply perfect. I must say that this is not an absolute novelty, Samsung already allowed it in its mythical Galaxy S7.

On the Photos tab, you can switch between Month and Day views by pressing the screen with two fingers. A new, more energetic 4: 3 layout is available for the Albums tab. There are also some ways to classify your photos. 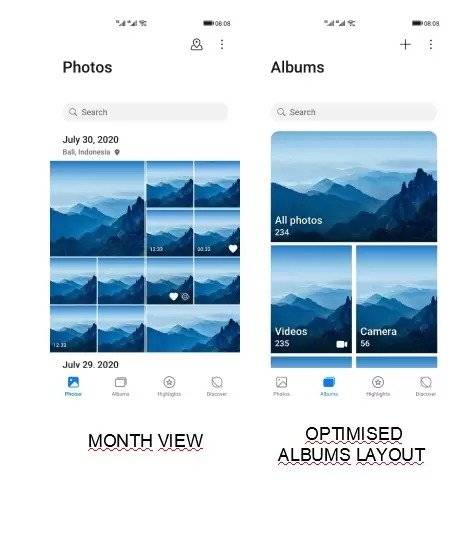 The animation mechanism has been optimized for ergonomics, based on the human factor. The transition animations now mimic the ‘one-shot’ visual effect sequence so as not to detract from the user’s focus as the elements move in the UI.

This is another novelty that we find very interesting, you can now set the vibration to accompany your touch. It is small details like this that make the experience with more pleasant and fluid equipment. The device vibrates with the touch audio. 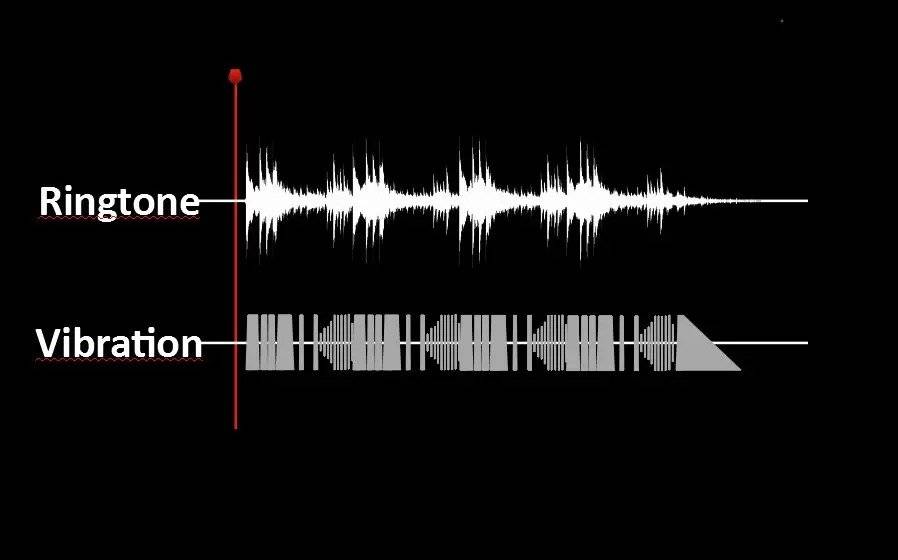 To activate Smart Multi-Window on EMUI 11: Slide inside any side of the screen and hold to access the side panel. Drag an application to start Smart Multi-Window. Touch the top-right icon in the multitasking management window. When playing or watching a video, they can still respond to messages in a floating window without leaving or minimizing the active application (s). When opening new applications, such as Maps or opening an attachment in an email, the new window will start as a floating window to minimize disruption. 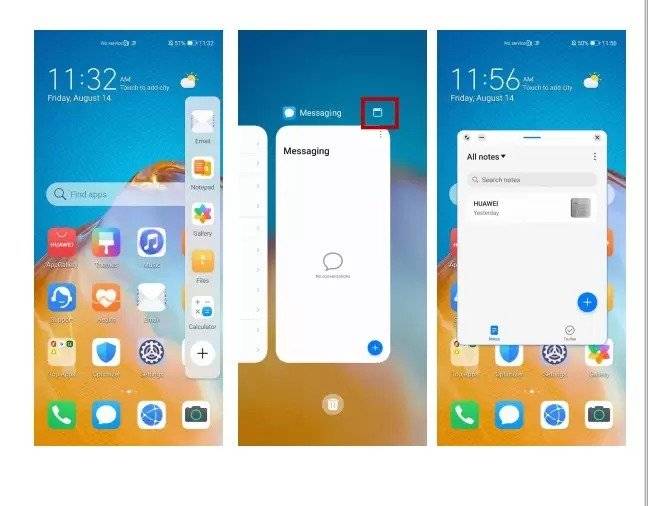 Minimize or adjust the size of floating windows 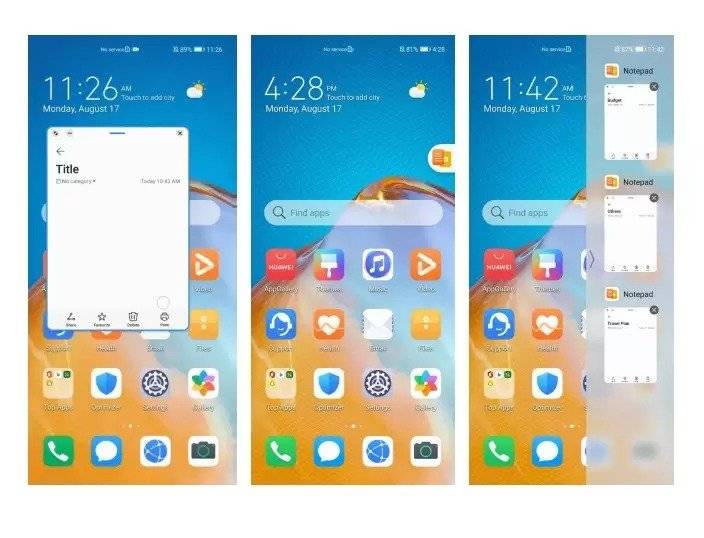 improved screen collaboration and for all scenarios

As smart technology gains prominence in the market, more and more consumers will have access to more and more smart devices. By virtualizing hardware resources, Huawei’s distributed technology allows practical and integrated use of various functionalities on various devices. With this new ‘super device’, users will be able to customize the experience according to their needs.

Steps ： Put your smartphone on the Huawei Share tag on a MateBook to activate Collaboration on multiple screens. They can transform an application into a new floating window by clicking on the top-left icon. This feature currently supports up to three floating windows at the same time. They can also drag and drop text and files into different windows to transfer data easily.

It is also possible to directly edit the files saved on the smartphone with the PC.

Multi-screen Collaboration 3.0: Turn your smartphone into a scanner

Steps: Enable Collaboration on multiple screens. Transfer the images taken on the smartphone directly to the PC. Character recognition allows you to easily edit the text in an image.

Steps: Enable Collaboration on multiple screens. When there is an incoming audio/video call, simply touch the icon on the PC screen to answer the call. They can use the PC’s microphone and a webcam to conduct the call.

Steps: Open Notepad, touch the icon to create a new note. Select Gallery and touch Scan document Touch Extract text and save your work. Text and images are now editable.

During lectures or meetings, they may find it difficult to write down what the presenter wrote on the whiteboard as notes on the PC or tablet. But now with Notepad, they can use the powerful camera on Huawei smartphones to capture these squiggles clearly. Steps: Open Notepad, tap the camera icon, and select your phone’s camera. your phone will automatically open the camera application. Take a photo and your photo will automatically appear in the note.

How to update a Huawei smartphone?

There are several ways, all valid in the case of the update: there will not always be a new version available for your smartphone, no matter if you use several methods, if there are not, there is not. Of course, it is convenient to meet them all, let’s get to it.

Wireless or Over The Air (OTA) updates

This is the most common form of update: when we least expect it, a pending update appears in the notification area. Just press on this warning and follow the instructions for the smartphone to be updated quickly and safely. It is convenient, however, to download these new versions only when connected to WiFi networks : they are heavy, and will certainly consume your data packet. In case you want to check if you have an update available, just do the following:

Using your computer and HiSuite

In addition to receiving updates on the phone, they are also available with the software of Huawei computers: HiSuite. It is valid not only to search for new versions of software but also to make backup copies or transfer images between the smartphone and the computer, for example. To update your Huawei with your computer, you must do the following:

This is the last official way to install updates: manually installing the update file. It is dangerous because if you make a mistake and try to install/load firmware different from the phone model, it can damage your smartphone forever. Even so, it is useful to know this method, as it can sometimes be the only way to renew the smartphone’s firmware. And even do an Unbrick on the phone. We reiterate how delicate this operation is, you only have to execute it and have the correct update file and are willing to take the risks. For that:

What you should know before updating your Huawei / Honor phone

So far, we’ve seen the four official ways to update a Huawei or Honor smartphone with Android . They are organized in order of difficulty and also by level of risk, although there are a few considerations to keep in mind before updating:

How to schedule downloads in Google Chrome for Android