Last May Huawei launched on the Italian market the MatePad Pro, a product with excellent technical specifications that have already received great appreciation.

However, the price of the MatePad Pro is not accessible to all budgets, which is why the giant from Shenzhen also wanted to release the “basic” variant in Italy. 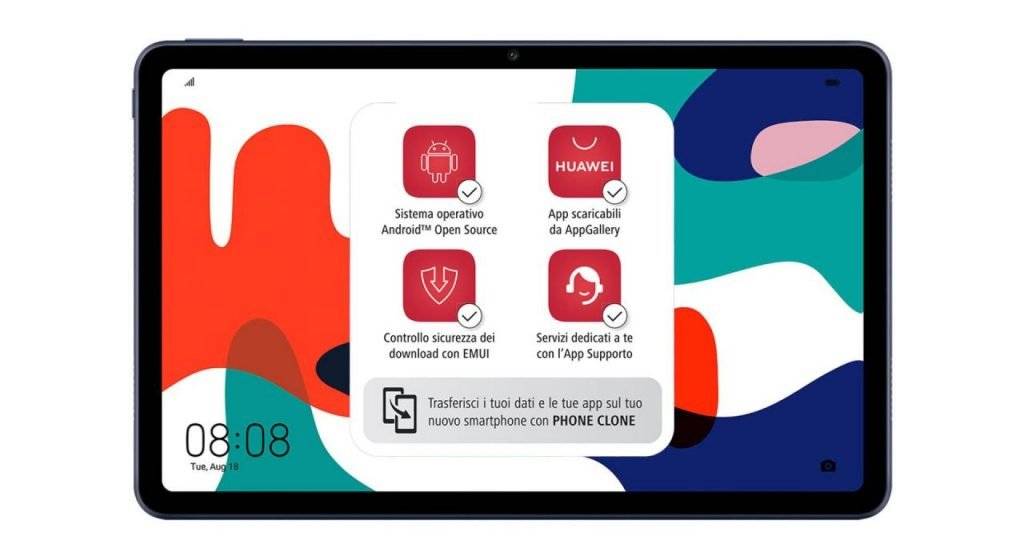 Since yesterday, in fact, the MatePad is finally available in our country, and the price is clearly lower than that proposed for the “Pro” variant. We are facing a mid-range tablet, which works with the EMUI 10.1 customization based on Android 10, or the current version of the Google operating system (waiting for Android 11, ed).

However, as was easy to predict, Huawei MatePad arrives in the Italian market without the services of BigG due to the now “famous” ban inflicted by the US administration on the giant based in Shenzhen.

Despite having to note this “defection”, Huawei’s MatePad is still a more than good product, powered by a Kirin 810 processor. The chip is paired with a Mali-G52 GPU, in addition to 3/4 GB of RAM and 32/64 GB of internal memory (expandable up to 512 GB).

The display of this new device from the Chinese company it’s a 10.4-inch IPS, with 2000 x 1200 pixel resolution. As for the photo sector, the MatePad is equipped with an 8 MP camera on the back (wide angle) and also with a camera positioned on the front, always 8 MP.

The product is finally equipped with a 7,250 mAh battery, which should be able to guarantee a good level of autonomy. In terms of connectivity, there are LTE support, Wi-Fi 802.11 ac and Bluetooth 5.1. The tablet is available on Amazon in two variants: the Wi-Fi-only one is sold for € 329.90, while the Wi-Fi and LTE variant has a price of 379.90 euros.

Users who purchase the tablet by July 31 will receive the free gift Huawei M-Pencil, which has a value of 129.90 euros, plus 15 GB of Cloud, 3 months of Music, and 3 months of Video.

How To Use 2 or More Webcams on Skype