How To Fix Samsung Galaxy S and Note Performance Problems

Over the years, in fact, it may be possible to notice a decrease in performance, through slowdowns in performance. If your Samsung Galaxy S or Note no longer shines as it once was, there are solutions to get it back. Here are the best tips.

Samsung Galaxy S and Note: how to solve slowdowns and performance drops

Although it may seem like an unnecessary action at first glance, restarting your Samsung Galaxy S or Note can often quickly solve problems and problems.

With this simple action, it is possible to restart the system and the processes, allowing the app to function correctly which presented problems of operation. It may later be useful to eliminate some space, getting rid of those unused apps.

To restart, hold down the power button for two seconds and tap “restart”.

Check out the apps that consume too much battery

Most of the time, performance problems can result from apps that exhibit abnormal behavior. If Samsung Galaxy S or Note is used too often by an application, the battery will tend to last less.

By checking battery usage, you may find clues as to where to take appropriate action.

You can inspect the battery usage in Settings > Device service> Battery > Battery usage. The advice is to check the use at the end of the day for complete statistics.

Unless it’s games or other demanding apps, the percentage of consumption should usually be around low percentages, between 1 and 5%.

If an application exceeds these values, it is worth investigating further, especially if it is an app that is not often used and that is often used in the background.

On the latest devices in the house equipped with One UI 2, the battery usage screen even allows you to view the battery data for the previous days, which can be very useful to check if the problem persisted even earlier, through the history of consumption.

By following the same logic regarding battery usage, you can also check how much memory is used by apps.

High memory usage may be indicative of an abnormally behaving app that may steal RAM from the operating system. To take a look, go to Settings> Device assistance > memory.

You will get a summary, showing a division of the amount of RAM used recently for each app. The amount of RAM available at the top is the first thing to keep an eye on. What time is at least 1GB available, then there will be nothing to worry about.

However, if there is an app that presents an abnormal use, leaving little RAM to the system, in this case you can force the shutdown, thus checking if it was a passenger problem or something to be further investigated.

Use the Optimize button now located at the top, for general optimization of RAM usage. Normally, Samsung’s OneUI subtracts RAM from those apps that are not often used, making it available to the system.

Uninstalling unused or unused apps can help find the source of the slowdown problem.

Go to Settings> App to view the complete list of apps installed on your Samsung Galaxy S or Note. Then touch the menu button, located in the upper right corner, then Sort by and choose Use by application, this will make it possible to display the less used apps at the bottom of the list. Proceed to uninstall the latter.

If you still want to keep an app installed, but make sure that it has no possibility of consuming system resources, including the battery, you can disable it. Do this only if you have ample space available on the device.

If you can’t find the cause of the slowdown or problems in general between the apps, restoring the settings can be for you. 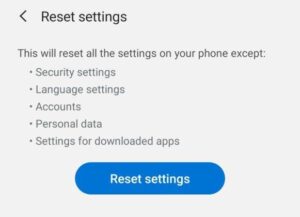 To run it, go to Settings> General management> Reset then Reset settings. This will not delete the personal data stored in the device but will return to the default state all those settings that you changed over time, which may have given rise to the problem.

Usually the last beach, the factory reset can in extreme cases be an inevitable solution. In this case, perform a data backup, then go to the previously mentioned reset settings, selecting this time  Factory data reset.

Once the process is completed, the device will return to the same purchase status.

What are the 5 best dribbles on FIFA Mobile?