You will need to download and set up the Android SDK on your computer.

This will be used to initiate the backup and restore process on your Android devices. It’s also recommended that you set your device’s display sleep timer to a time that will disable it from turning off during the process.

To do this go to Settings>Display>Sleep and choose the longest time period as possible.

How to fully backup your Android smartphone or tablet with ADB commands:

How to backup your Android device’s data |

How to restore your Android device’s data |

Android Backup Without Root: The 4 Best Applications For Your Device:

What if you’re not rooted or can’t install a custom recovery? If that’s the case, you need an alternative. We rounded up four of the most promising alternative backup apps for Android.

Indie developer OmegaVesko created something impressive with Holo Backup. It’s a simple program for Windows and Linux that backs up your phone data, apps, system apps, storage, and texts. 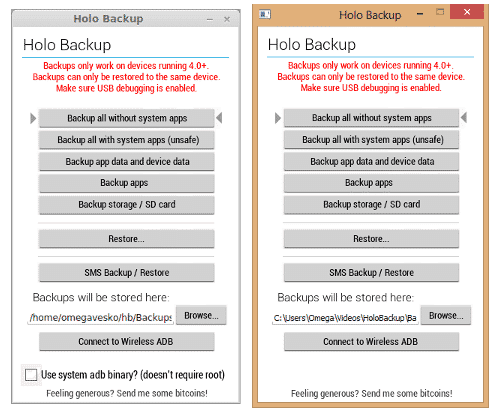 The best part? It doesn’t even need root. As long as you’ve got ADB and a phone on Android 4.0+, you can use Holo Backup. Though we’re sore about the lack of Mac support.

You can use Holo Backup over wifi as well. As long as you enable wireless ADB debugging in the settings, no cords are required.

Overall, Holo Backup is the best option for users without a custom recovery looking for a good way to keep backups.

The guys at ClockworkMod created another alternative for people without their famous ClockworkMod Recovery. Helium is an easy way to back up your phone, with or without root.

Rooted users need only download Helium to start backing up to their SD card or PC. Non-rooted users can use it as well, though they’ll need a companion desktop app.

The free version works well enough, provided you don’t mind ads. Coughing up $5 for the premium key gets you regular backups and no ads.

Helium is another good way to keep backups on your PC. We also have to give it a nod for supporting Windows, Mac, and Linux.

G Cloud Backup saves photos, videos, music, system settings, and messages. Unlike other systems, it also focuses on security during the transfer to the cloud. It uses only SSL and 256-AES for storage.

If you’re rooted, you can save even more data like app states and settings. It’s a good deal overall.

The cost could become a factor. G Cloud Backup is free up to 10 GB. Subscribe for $2/month and you can remove the ads and get unlimited storage. Overall, not a bad deal.

Super Backup is a longtime backup app that offers decent features in the free version. Download this app and you can backup apps, call logs, messages, and bookmarks to your SD card or Gmail.

The app differentiates itself by offering scheduled backups in the free version, a nice touch compared to other apps. It also requires no PC companion apps.

Give Super Backup a shot if you need something less fully featured but would like free automated backups.

The procedure we will show you today is based on using SP Flash to extract the firmware of your device. This approach does not require root.

IMPORTANT: The procedure described in this guide presents complex operations that, if performed incorrectly, could damage your device.

It is recommended to run it only by users who have gained good experience in modding. The staff of GizChina.it will not be held responsible for any damage to the device.

One of the most important tasks and higher recommendation when flashing our smartphone with  MediaTek MT67XX processor  is to make a backup of the NVRAM partition,

It is in this partition where the information related to the IMEI, WiFi MAC address, and Bluetooth is stored, and which is lost when using the Format All + Download installation method or even for other types of actions, something that was mentioned in the  SP Flash Tools user manual in order to flash the Stock ROM of our mobile with MediaTek.

The backup process of this partition works on the MediaTek MT67XX processors.

How To Backup And Restore IMEI NVRAM