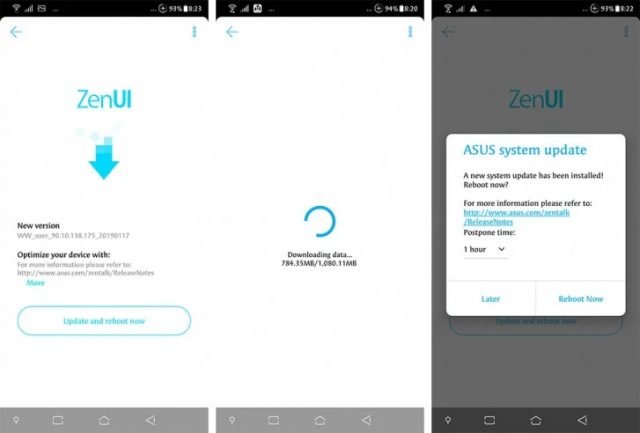 At the end of last year, users of Asus Zenfone 5Z smartphones in Taiwan started receiving firmware updates to Android 9.0 Pie, however, it took almost a month for developers to start distributing this firmware version to all regions of the world. During this time, the final testing of the firmware was carried out, and now users of all other regions have started receiving the corresponding update.

ZenUI Android 9.0 Pie firmware will bring Asus Zenfone 5Z an improved continuous shooting mode for the camera, a modified, faster interface, a gesture-based navigation system, new system sounds, icons, and notifications. In addition, the update contains fixes for previously found errors, various improvements, and optimizations, including those that increase the battery life of the device.

Recall, Asus Zenfone 5Z was introduced last summer. He received a Qualcomm Snapdragon 845 processor, a 6.2-inch display with a resolution of 2246 x 1080 pixels, up to 8 GB of operational and 256 GB of internal memory, as well as a dual main camera with 12 and 8-megapixel resolution modules.

Unfortunately, humans began to build houses, buildings, factories, shops, roads, among other things; without considering that not all people can move with the same ease. For...
Read more

Recently, Fitbit announced that it will carry out a study that seeks to detect COVID-19 symptoms early with its smart bands.  This is not entirely new, as for...
Read more

Xiaomi's new POCO F2 Pro is official and arrives to give continuity to the model launched in September 2018, which throughout its life has...
Read more

Earlier this week, OnePlus released new software updates for the OnePlus 7 and 7 Pro, which were released as OxygenOS 10.3.2 in India and 10.0.5 on European and...
Read more
- Advertisment -

How To Use Old Android As a Webcam

One of the main advantages that Android phones have is that once they are "retired" they can still be used in other contexts. In fact, in this...
Read more

The Raspberry Pi was intended as a super portable computer, the size of a credit card . The initial idea was that the little ones could experiment...
Read more

A Chromecast is an extremely useful device that allows you to easily send content from your mobile to your TV. It really is not very...
Read more

How To Remove Advertisements From MIUI 12 System Apps

Xiaomi with its devices has accustomed us to an excellent quality/price ratio, offering high-performance devices, equipped with good hardware net of a decidedly contained...
Read more
- Advertisment -

This time I will share a tutorial on how to flash Galaxy Grand Prime SM-G531M uses Flash files. With computers in an easy and...
Read more

When it comes to a guide like how to flash Nobby X800 firmware, your information with flashing tools is important. However, installing the Nobby X800...
Read more

How To Update Huawei Y5P

Without a doubt your Huawei Y5P is doing an excellent job but, if it were to give software problems, in the worst-case scenario you...
Read more

Aio Mobile Stuff is a brilliant and well-trusted platform engaged in posting the best trusted and helpful tips about to-days most advanced cell phone’s Os.

Do NOT follow this link or you will be banned from the site!
We use cookies to ensure that we give you the best experience on our website. If you continue to use this site we will assume that you are happy with it.OkNoPrivacy policy