Apps to clean your mobile speaker with sound

As it is not a part that is covered or closed, thousands of particles can be strained, causing dirt to accumulate. Not only can that affect the speakers, which is going to happen, but it can also get to other crucial components of the device. The particularity of the matter is that we are not going to use chemical products, cotton, or swabs to clean them, since we are going to do it internally and with the help of the software.

The main cause of problems with the speaker is that our mobile is heard very low when receiving calls or notifications, or when playing some multimedia sound, even if we have the volume at maximum. The cause may be accumulated dirt on the speaker, or directly there is a problem that only a technician can solve by disassembling our device.

Two elements are the biggest enemies to the recesses of a speaker, dust and water. For the first one, it may be more complicated, although it is still possible, it is the water that is the easiest to remove. Yes, it is true of the harmfulness of water with technology, so removing it is going to be essential. To do this, we are going to use an application (or several) that allows us to expel that dirt from within.

It is necessary to bear in mind that, although this tool should work on most mobiles, not everyone can handle water in the same way, and it is possible that if you wet a terminal that is not IP certified, problems more serious than distorted audio may appear. On the other hand, mention that the application should not cause any type of damage to the speakers or any other element of the device’s hardware.

However, it is better not to abuse its operation and use it only when it is really necessary. It is recommended to use it a couple of times when this problem occurs to you, since using it too many times can cause it to damage a component.

By having such powerful speakers, Xiaomi gives an option to clean the speakers through the phone’s own settings. Point out that This option is not available for all Xiaomi phones, but yes for we can as popular as the POCO or some of their high-end mobiles.

It is a setting that is somewhat hidden and that makes the speakers literally blow out all the dust and water they might have. It is a great option to have on hand. Several Xiaomi mobiles allow you to clean the speakers from the system’s own settings.

The mechanism is quite simple, and it is that fairly loud audio plays for 30 seconds to expel all the particles that the speakers may contain. We speak in the plural because most Xiaomi phones that have this function have a dual speaker system, the most prone to damage over time. This can be a very interesting alternative if you have one of those mobiles from a Chinese company, but if you have another brand, there are more options.

Alternatives for other brands with audio cleaning apps

That second option and the one that falls to the rest of the manufacturers related to Android is to install an app specialized in cleaning the speakers. Fortunately, there are applications designed for this purpose. What they do is squeeze the speaker to the maximum at various frequencies so that the resulting vibration expels the speakers outward. dust or water particles causing the problem.

Eject the water – Repair the speaker

The application “Expel the water” will be responsible for repairing the speaker sound of our mobile if it has been in contact with water, emitting a series of vibrations to be able to dry it. Its operation is similar to that of the water expulsion mode that some devices such as those mentioned above natively include.

When it’s used, the app generates very low-frequency bass audio that causes the device’s speakers to expel air more than if any other type of sound was played, and in the process manages to carry it with its water and some of the dirt that may be present in them.

Its creator recommends increasing the volume of the device to the maximum before carrying out the process, as well as put the device with the screen facing down on a flat surface to maximize its effect. 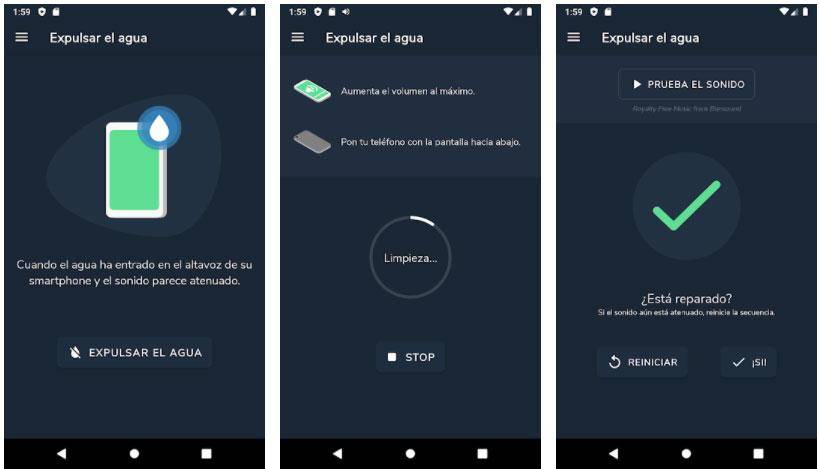 As an alternative, this is another application that will perform different vibrations and preset frequency wave sounds to shake off accumulated water or dirt quickly and easily. You may clean and expel the water speaker in terms of seconds. This simple process of removing water from the speaker is very easy to do and has a success rate of over 80%, depending on the condition of the component. 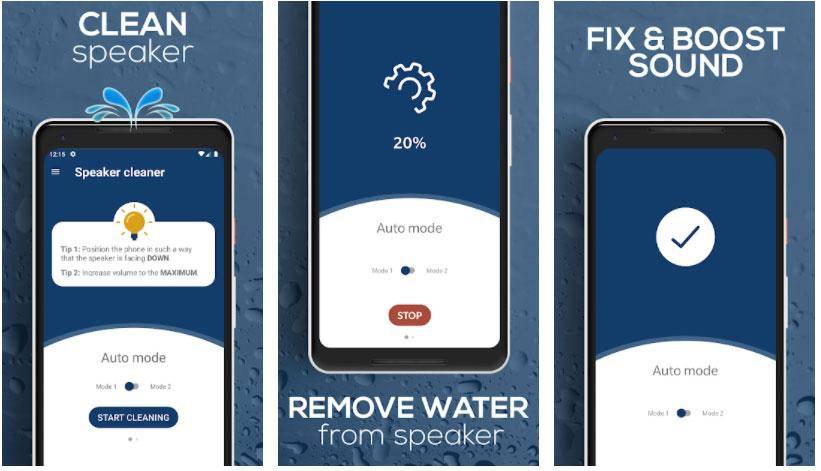 Allows you to make a “Virtual cleaning” simply and quickly. This app works very well when the mobile has gotten wet and the speaker of the same is not heard, besides that it is easy and fast to use, since only in 1 minute and 50 seconds your phone is free of dirt or water, that’s why also can be used to remove dirt that builds up inside the speaker.

With Super Speaker Cleaner, you can clean the speakers of your mobile with just one click. Put the phone down, turn the volume up to maximum, disconnect the headphones and start cleaning to see how this free app manages to expel water and dirt from the speakers. After the process, you can check how the distorted sound has disappeared. 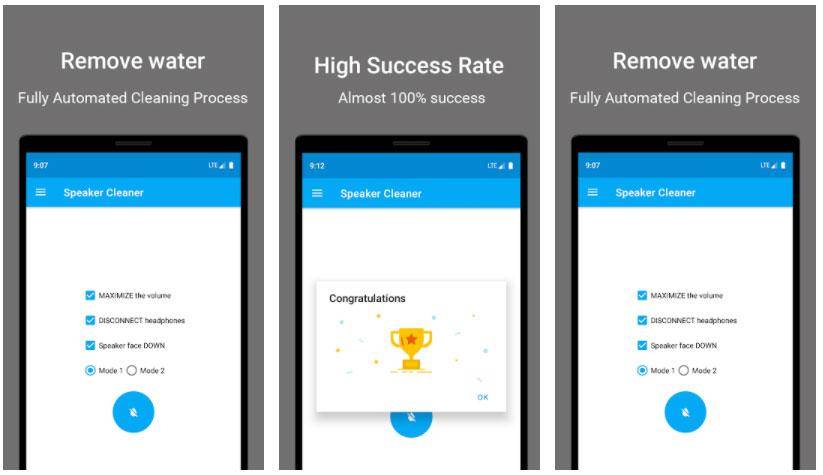